Read more
We are thrilled to be teaming up with the University Neighbourhood Association for our first concert this season!
Tickets are available here:
https://tickets.artspoints.com/events/52_Mzewest-Concert-Flute-and-String-Trio

Born in Taiwan, Paul Hung entered the Langley Fine Arts School at the age of 13 and made his first concerto debut at the age of 16 at the Whistler Music Festival. He was then featured several times as the winner of the Vancouver Kiwanis competition, and awarded the Tom Lee Music scholarship for Excellence in Music Performance. He was a recipient of the Canadian Broadcasting Corporation’s “Galaxie Rising Stars Award” and placed Second in National Music Competitions 2008. Paul performed with the Vancouver Youth Orchestra as a result of attaining first place in the concerto competition in 2009. Soon after, he performed as a soloist with the Abbotsford Symphony and New Westminster Symphony. In May of 2011, Paul won a spot in the YouTube Symphony and performed with 100 other musicians around the world at the Sydney Opera House.

As a passionate solo and chamber flute player, Paul performed in music festivals such as the Banff music festival, Domaine Forget, MusicFest Canada, Performing Arts BC, Vancouver Kiwanis Music Festival, Redshift Music Society and Health Arts Society. Paul also played frequently as a substitute with Vancouver Symphony and Kamloops Symphony. Recently, he was the substitute principal flute at Vancouver Island Symphony and Okanagan Symphony. In 2015 to 2016 season, he served as the acting principal flute at Prince George Symphony.

Paul was a student of Lorna McGhee. He has also studied under Brenda Fedoruk; and then Christie Reside, the principal flutist of Vancouver Symphony, during his Master’s degree at UBC School of Music. He is currently a faculty member at the Vancouver Academy of Music and St. James Music Academy.

Originally from Delta, BC, violinist, Erin James Wong holds a Master of Performance Degree from the Royal College of Music in London, England and a Bachelor of Music Degree from the University of British Columbia. She currently spends the majority of her time performing with the Vancouver Symphony Orchestra, collaborating with colleagues in chamber music concerts and sharing her love of music with her violin students. Many of Erin’s performances have been aired on CBC Radio and have taken her to Canada’s most important concert halls and across Asia, Europe and North America.

Erin has had the privilege of working with many esteemed violin professors including her principal teachers Yossi Zivoni, Evgeny Grach, Jasper Wood and Andrew Dawes. Erin is fascinated by the ergonomics of violin playing and has studied Alexander Technique with Peter Buckoke and Marta Hunter with a particular interest to maximize excellent use of the body while playing the violin. Erin is a faculty member at the Vancouver Academy of Music and the Saint James Music Academy in the downtown eastside. She is a recent recipient of a BC Arts Council Professional Development Grant.

Canadian violist Tawnya Popoff enjoys a versatile career. In addition to being principal violist with the Vancouver Opera, she is a founding member of the string quartet Microcosmos, a member of the River Oaks Chamber Orchestra (TX), the Walden School Players (NH) and has ongoing collaborations with Cedar Lake Contemporary in NYC.

As an enthusiastic supporter of works by living composers, Ms. Popoff has commissioned and premiered numerous works and recorded many for the Koch, Albany, Nonsuch, CRI, SHSK’H (web label), Columbia Composers and others. She has won numerous awards and has served on the faculties of the Perlman Music Program, University of Pennsylvania, Syracuse University, SUNY Buffalo, the Bowdoin International Music Festival and Artes no Camiño (Spain).

Tawnya Popoff studied with Gerald Stanick (Fine Arts Quartet) in Vancouver, BC and Martha Katz (Cleveland Quartet) at Rice University. Her viola was played by Boris Kroyt of the Budapest Quartet, generously loaned to her courtesy of his grandson.

Cellist Rebecca Wenham’s performances have been described as “silken, highly refined” (the Globe and Mail) as well as having “extraordinary commitment and maturity” (La Gazette). Her animated playing style is often surprising, dramatic and impulsive, leaving a breathless audience on the edge of their seats. She has performed across North America, Mexico, Europe, Japan and Australia. As a member of the Cecilia String Quartet she has won prizes in the Osaka, Rutenberg, Bordeaux and Banff International String Quartet Competitions, and was a CBC Galaxie Rising Star in 2007. Rebecca has collaborated with many composers including Common Sense Composers Collective, Ana Sokolovic, Gilbert Amy, Kelly-Marie Murphy and William Bolcom. She recently premiered a new work for solo cello and chamber orchestra by Owen Underhill, The Curio Box, commissioned by Vancouver New Music. Rebecca recently performed the Elgar cello concerto with the Vancouver Philharmonic;  this coming May, Music on Main will present Rebecca in a program of solo cello exploring works that highlight divergent musical styles, from classical to music by jazz cellist Peggy Lee and rock violinist Sarah Neufeld.

A member of Microcosmos Quartet since 2011, an ensemble committed to performing music of the last 100 years (or so), she presents programs in intimate settings such as private homes, art galleries, clubs and small halls. Microcosmos Quartet held its inaugural string orchestra mentorship program, the Kessler Academy, in September.  Rebecca was recently named principal cello of the Vancouver Opera Orchestra. Her projects have been generously funded by the Canada Council, the BC Arts Council and ProQuartet. She holds degrees from the HARID Conservatory of Music, and from Rice, San Diego State and McGill Universities. 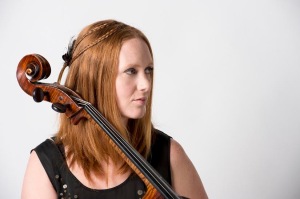